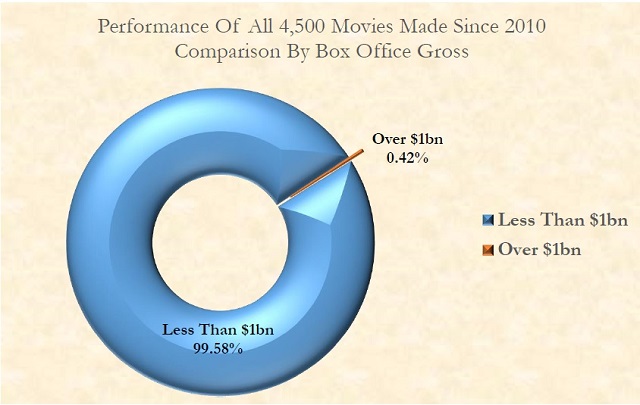 Here’s the famous list of 19 movies. All this info was gathered from Box Office Mojo, The Numbers, Wikipedia, and other sources. 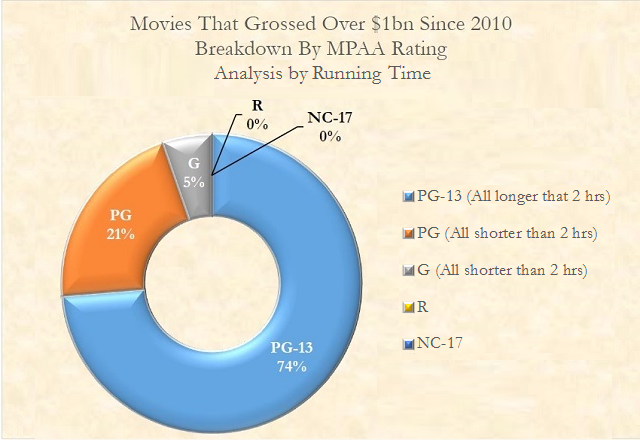 There’s a reason Disney (Buena Vista) is dominating the below list, and I believe it’s mostly to do with the fun, light-hearted, family-friendly tone of their films.

It seems the most financially successful movies are those that feature lively color grading with lots of light and daytime scenes. Many people may find this point rather odd, but the  numbers don’t lie; the less daytime scenes there are in a movie the less likely it is to hit the $1bn mark. Period.

More than half of the movies that grossing over $1bn were Disney / Buena Vista films. There seems to be a tie-in between this and the point above about the general mood and feel of their films. Perhaps this explains why Disney does so well (think Avengers) while Warner Bros not so much (Batman vs Superman).

The best time to release a movie is either in summer (1st Friday of May to 1st Monday of September), or the holiday period (1st Friday of November to the New Year’s week or weekend).

Perhaps this is because every single movie that made over $1bn at the box office, with the exception of Alice In Wonderland, Zootopia, & Furious 7, was released either in the holiday period or in summer. In fact, all the Marvel cinematic universe movies were released on exactly the same day (in different years of course), that day being the 1st Friday of May which is also the 1st day of Summer. Noteworthy also is that the only 3 movies to gross $2bn (non-inflation adjusted), namely Avatar, Titanic, and Star Wars: The Force Awakens, were all released on either December 18 or 19. James Cameron’s 2 big movies, Avatar & Titanic, where both released on the 3rd Friday of December. 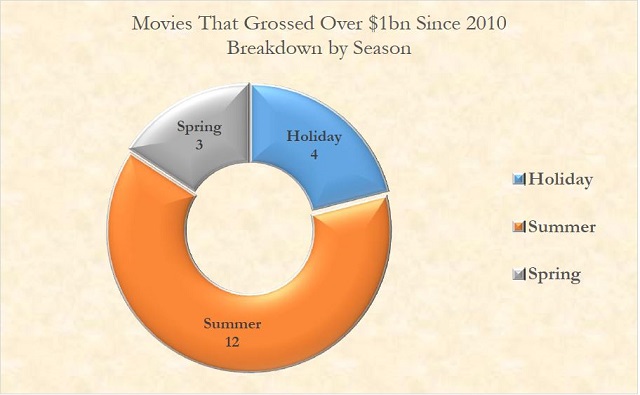 Based on the above infographic, if a movie was released in Winter or Fall, it had zero chance of grossing $1bn.

As shown below, only 2 of the movies in the top 10 list of all time highest grossing movies were written by the same person, James Cameron. Is it coincidence also that they were directed by their writer too? I wonder. Perhaps there’s something about letting the creative mind behind a story take their vision from paper to screen. Below is the list of the top 10 highest grossing movies of all time, adjusted for inflation.

Since 1980, 4 movies have made it into the top 10 all time list, namely E.T. the Extra-Terrestrial, Titanic, Avatar, & Star Wars: The Force Awakens. These films were released 15, 12, & 6 years apart respectively. Based on this trajectory, we can assume the next big movie will be hitting the big screen sometime in 2018 or 2019.

In conclusion, I guess it can accurately be stated that apart from G & PG movies, if your movie is A) less than 2 hours long or B) not a PG-13 or C) released in either Winter or Fall, then clearly you can forget about making $1bn at the box office. Sorry Deadpool 2.